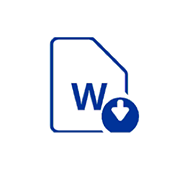 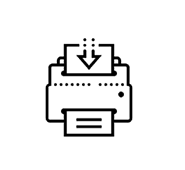 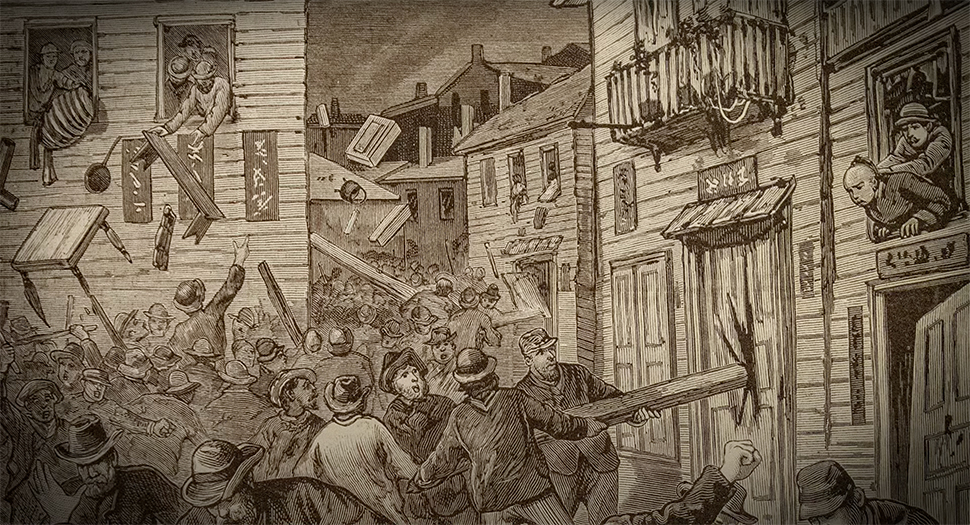 Ohanesian, Liz. “How the Destruction Of LA's Original Chinatown Led To The One We Have Today.” LAist, 05 February 2019. https://laist.com/news/entertainment/destruction-las-original-chinatown-led-to-one-we-have-today. Accessed 31 August 2021. 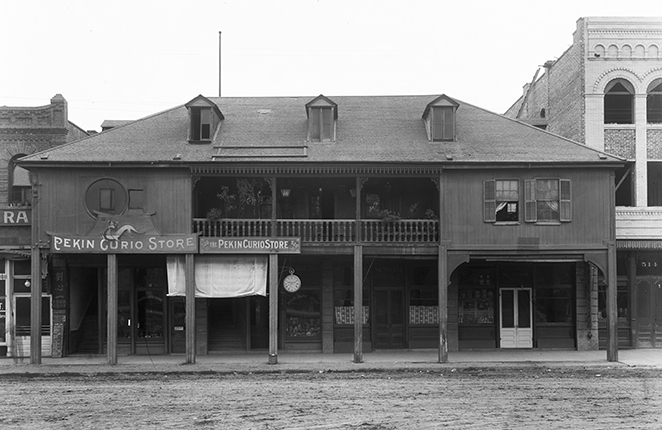 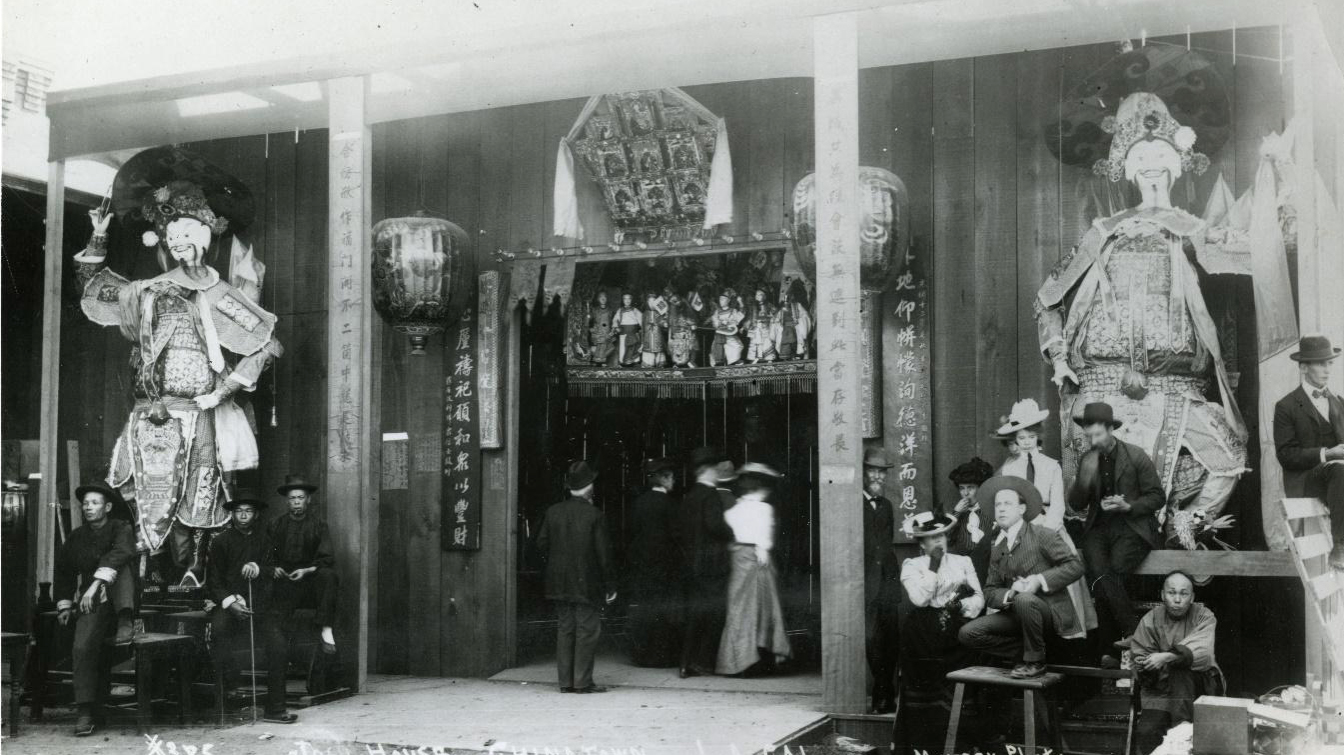 Joss House in Chinatown
Credit: Chinese American Museum, Courtesy of the Southwest Museum of Los Angeles
Activity 1: Understanding the History of Anti-Asian Violence
This activity aims to contextualize and discuss the many causes of the 1871 Massacre. 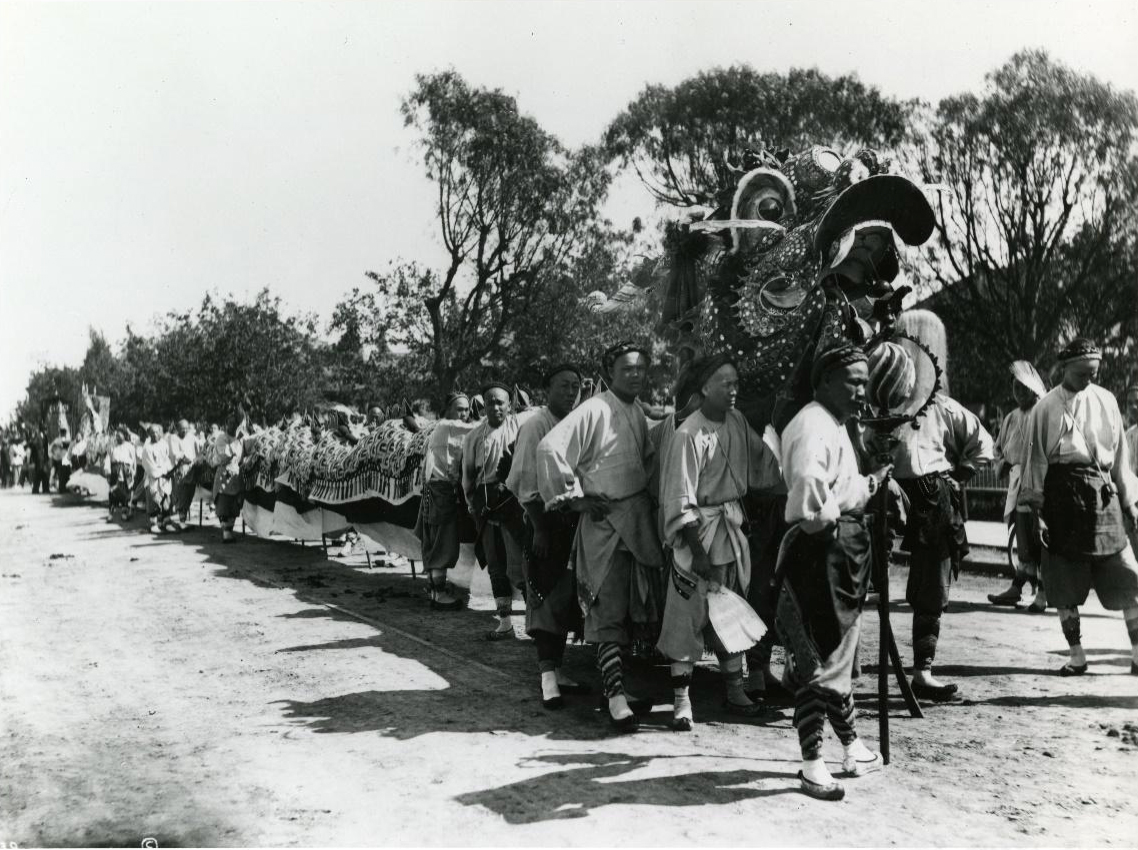 Chinese Dragon Procession
Credit: Chinese American Museum, Courtesy of Florence Ung Francis
Activity 2: Contextualizing the Chinese Massacre of 1871
This activity aims to compare the 1871 Massacre to other acts of xenophobic and racist violence in the U.S. 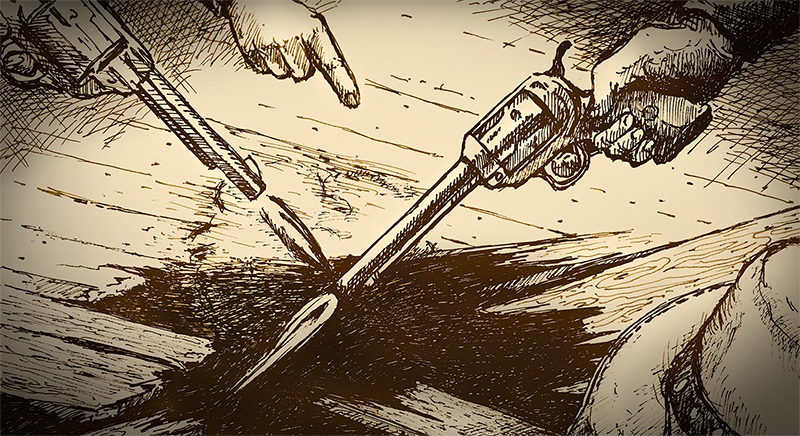 Shooting through the roof. Killing innocent Chinese.
Source: Buried History: Retracing the Chinese Massacre of 1871
Activity 3: Truth & Reconciliation
This activity helps students consider how an injustice as deeply impactful and harmful as a massacre can be reconciled and how the impacted community might be able to find justice and healing. 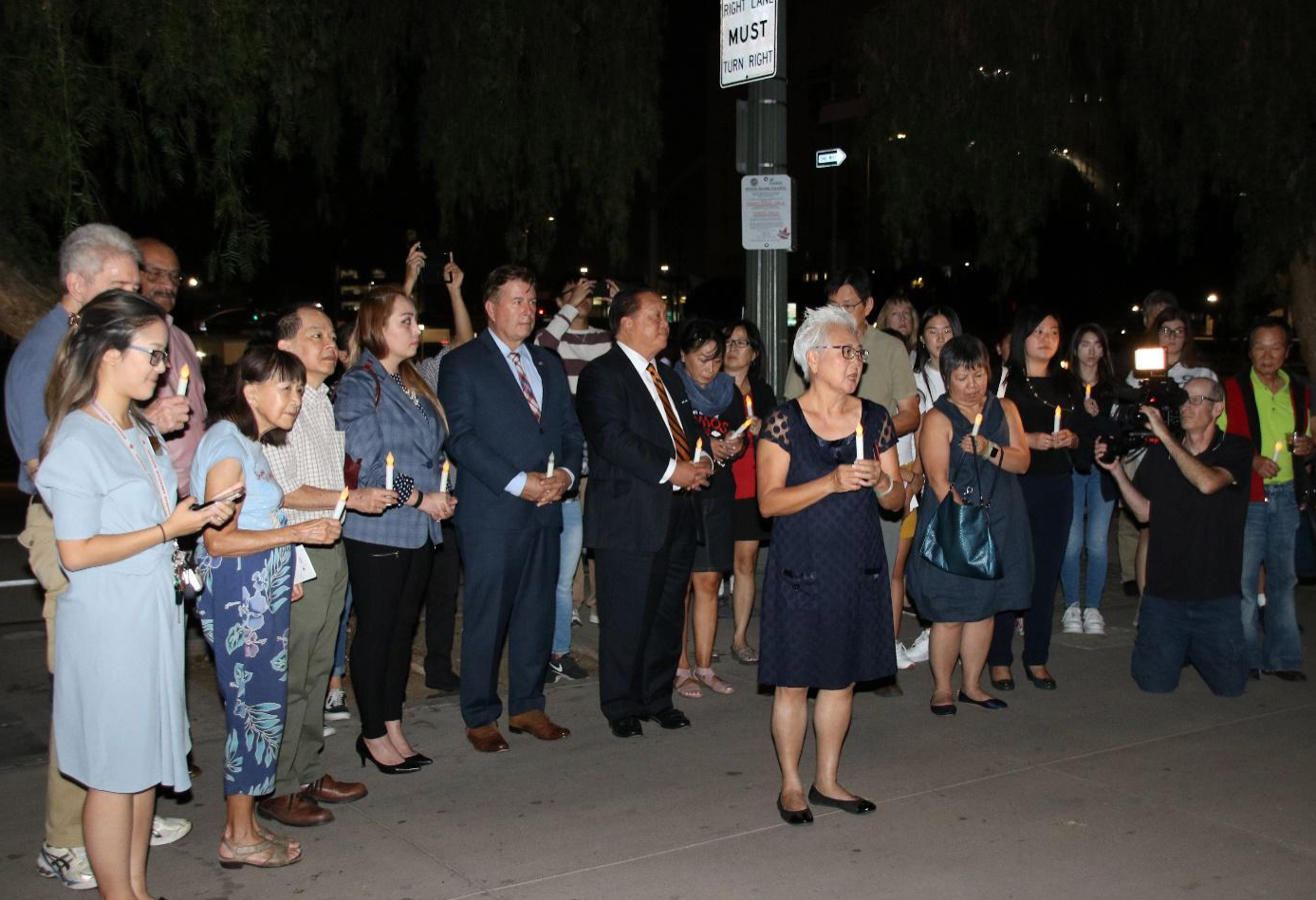 Candlelight Vigil at Chinese American Museum, 2021
Credit: Chinese American Museum
Activity 4: Commemorating through Museums
This activity helps students build a deeper understanding of the Chinese Massacre of 1871 in a creative way.
Handout Links:
Chinese Massacre Cause and Effect Organizer, https://docs.google.com/document/d/1kNYgwv3o5mFaE8qE5pKIic_rlNhwWyrp/edit
Chinese Massacre Comparison Research Organizer, https://docs.google.com/document/d/1KA1Nw9LWy33w6XssoFSmfBP776U52CPt/edit.
Chinese Massacre Museum Activity Historical Images,  https://docs.google.com/document/d/1MxxFtElYuAqbEhLFWWAdLPqLYGeDDV34/edit.
Chinese Massacre Truth and Reconciliation: Research Organizer, https://docs.google.com/document/d/1LO0JdkOJoEYDk3Zn1PcqSEi_G_FOV1S4/edit.
Further Information
“Chinese Massacre of 1871.” WikiMili, 10 February 2022. https://wikimili.com/en/Chinese_massacre_of_1871. Accessed 08 May 2022.
“The Chinese Massacre: One of Los Angeles’ Worse Atrocities.” KCET Lost LA, 17 October 2017. https://www.kcet.org/shows/lost-la/clip/the-chinese-massacre-one-of-los-angeles-worst-atrocities. Accessed 4 October 2021.
“The Chinese Question.” Digital Public Library of America, 1871. https://dp.la/primary-source-sets/early-chinese-immigration-to-the-us/sources/87. Accessed 4 October 2021.
“The Jade Pendant.” Directed by Po-Chih Leong, Lotus Entertainment. 2017.
Johnson, John. “How Los Angeles Covered up the Massacre of 17 Chinese.” LA Weekly, 10 March 2011. https://www.laweekly.com/how-los-angeles-covered-up-the-massacre-of-17-chinese/". Accessed 4 October 2021.
“Recounting the Chinese Massacre of 1871.” YouTube, uploaded by Chinese American Museum, 8 October 2019. https://www.youtube.com/watch?v=lzqZoiBXCZQ. Accessed 4 October 2021.
“Remembering the Chinese Massacre of 1871.” YouTube, uploaded by CNBC Television, 6 May 2021. https://www.youtube.com/watch?v=m7-xpchI6zM. Accessed 4 October 2021.
“Reports.” Stop AAPI Hate, 2021. https://stopaapihate.org/reports/. Accessed 4 October 2021.
Waite, Kevin.“The Bloody History of Anti-Asian Violence in the West”. National Geographic, 10 May 2021. https://www.nationalgeographic.com/history/article/the-bloody-history-of-anti-asian-violence-in-the-west. Accessed 13 May 2022.
Woo, Elaine (Producer) & LeeWong, Cameron (Director). October 2021. Buried History: Retracing the Chinese Massacre of 1871 [Motion picture]. United States: Chinese American Museum. https://www.youtube.com/watch?v=hjZmMUZgwrQ. Accessed 05 May 2022
Woo, Michael. “AFTER 150 YEARS, IS L.A. READY TO REMEMBER THE CHINESE MASSACRE? Long Buried, the Bloodiest Night in the City’s History Surfaces Amid a New Wave of Violence.”Zócalo Public Square, 24 October 2021. https://www.zocalopublicsquare.org/2021/10/24/remember-1871-chinatown-massacre-los-angeles/ideas/essay/. Accessed 11 May 2022.
Sidebar Stories
Black Wall Street & The Tulsa Race Massacre
In the late 1800s and early 1900s, the Greenwood district of Tulsa, Oklahoma, where most of the state’s 10,000 Black residents lived, was known as “Black Wall Street.” Tulsa, and more broadly Oklahoma, was segregated at the time. As such, Greenwood was built by Black people for Black people. Every dollar within Greenwood would be spent within the neighborhood about 19 times before it left the community. Greenwood had it all: luxury shops, restaurants, grocery stores, movie theaters, salons, barbershops, library, night clubs, bank, hospital, post office, professional offices for doctors, lawyers, and dentists, and bus and taxi services. The community also had its own public school system.
On May 31, 1921, a young Black man, Dick Rowland, was accused of sexually assaulting a young white woman, leading to the Tulsa Race Massacre. Fearing the lynching of the young Black man who was arrested earlier in the day, a group of about 75 Black men went over to the Tulsa courthouse, where they were met by about 1,500 white people. Shots were fired at the courthouse and the Black men left and returned to Greenwood. Over the course of the night and following day, mobs of armed white people—some deputized and provided weapons by city officials—attacked Greenwood’s Black residents and businesses. Thousands of white Tulsa residents committed violence against Black people, looting and burning homes and businesses. Happening over 35 city blocks, 1,256 houses were burned (including the school, library, hospital, churches, hotels and businesses), and 215 places looted.
The Tulsa Race Massacre was deliberately not reported on by the media, or commemorated, for decades, in an effort to cover up the event. Police and state militia archives about the massacre were missing as well. In 2001, a Race Riot Commission was formed and their report ascertained that 100-300 people were killed during the massacre, and more than 8,000 people were made homeless. 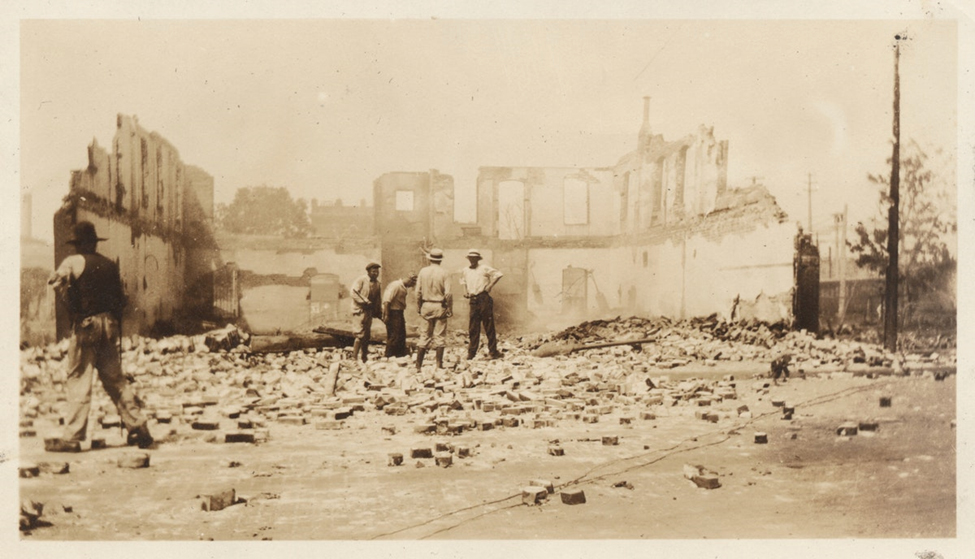 Several men stand amongst the ruins left behind from the Tulsa Race Massacre, on June 1, 1921.
Source: The Public Domain Review.

A group of Black physicians, dentists, and pharmacists at a medical conference in 1920, photographed outside the Dreamland Theatre in the Greenwood district of Tulsa.
Source: The Public Domain Review. 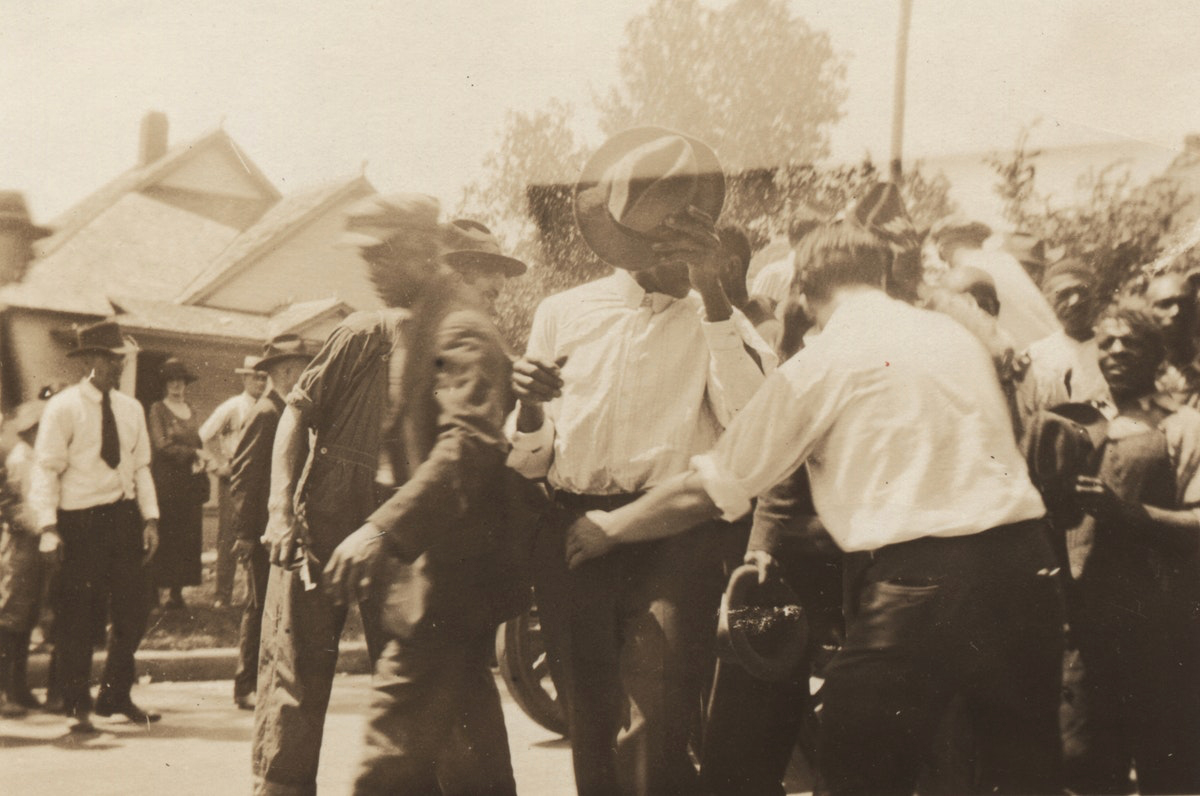 Black Greenwood residents, victims of the massacre, being detained and escorted down the street. There is no evidence that any of the white people involved in and carrying out the violence of the massacre were detained or arrested by authorities.
Source: The Public Domain Review.
City of Antioch, CA, Apology to Early Chinese Immigrants:
In 1851, a county law that included the city of Antioch, California, prohibited Chinese people from being out after sundown. This forced the Chinese community to create an underground tunnel system to get around the city after dark. Such ”sundown towns” existed all over the United States, targeting non-white people, especially Black people. In 1876, matters worsened and Antioch’s white residents drove the Chinese community out of the city and burned down their Chinatown. In May 2021, Antioch became the first city in the country to apologize to early Chinese immigrants and their descendants for how they had been mistreated. The apology came in the form of a resolution that was passed unanimously by the city council, and led by Antioch’s mayor, Lamar Thorpe, a Black Mexican American. 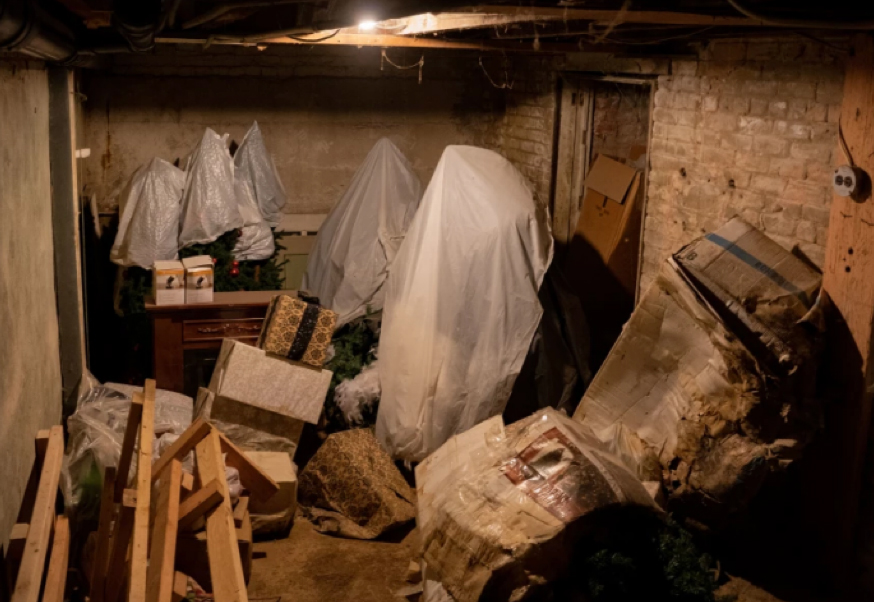 The basement of current-day Reign Salon in Antioch shows a sealed-off spot that once provided Chinese residents access to the tunnels in the 1870s.
Source: Images by Mengshin Lin for the Los Angeles Times 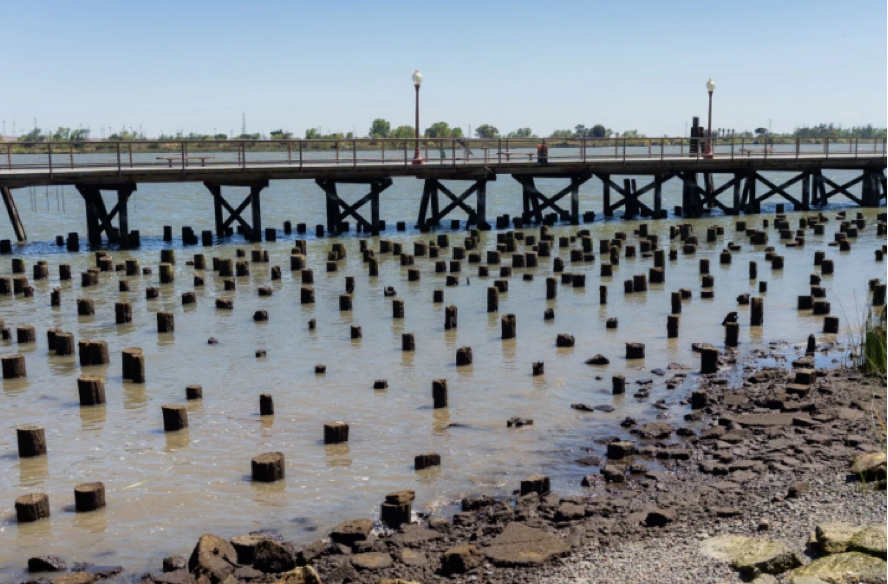